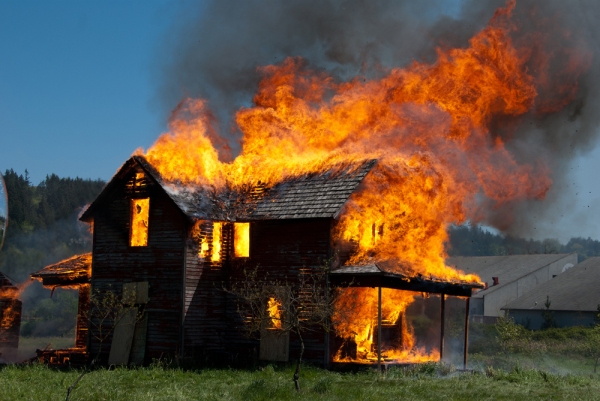 The Engfer farm ended in fire.  I missed the actual demolition day, but my friend Lydia was there to document the funeral pyre.  Beautiful photo, sad ending.

As of today, building of new structures, laying of asphalt, construction of roads or businesses or apartments, has not begun.  The land sits empty, looking like it expects to be ploughed for next season’s crops, bit it waits in vain.  In the words of Mayor Cheryl Temple, “With the development of the Gratzer and Engfer properties, more jobs and shopping opportunities will be offered in addition to some condominiums. I see a growing mix of great restaurants, unique shops, historic buildings and homes.”

This was the home of people who were Orting.  Karl Engfer purchased 50 acres, a portion of the original Whitesell donation claim, in 1912 and had the home built in 1913 by Fred Mueller.

Karl’s son, John, worked for Fred for two years, then for James Evans for seven more learning the carpentry trade.  For many years the farm was run by family, then leased out until John took it over in 1932.  That land grew a little of everything over the years; in 1980 it became the Engfer family vineyard.

John was 93 in 1983.  At age three he and his family traveled from Germany to Hawaii, around Cape Horn aboard the F. H. Glade.  At age nine, he sailed to Victoria B.C., on to Seattle, down to Tacoma and on by train to his Uncle Albert Arndt’s home in McMillin.  In 1904 his family rented a place on South Hill, Puyallup, and he attended the one-room Firgrove school with seventeen other students.  Firgrove school is still on South Hill, but it has many more rooms and students.

Orting grew; the Engfers, the Deatry’s, the Knaack’s, the Whitesell’s — they all did the hard work of building a community.  That community still sits in the shadow of Mr. Rainier, but the life they knew has gone, only to be found it the history books, newspapers and keepsakes of descendants.

Yes, I missed the actual demolition, but I explored what was left after the fire. The silverware I had photographed on the counter in the kitchen rested in a bed of ashes.

In Case of Dinner 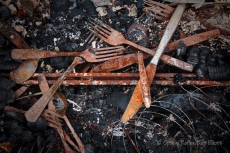 The bathtub, about the tallest thing left from the structure, was full of burned remnants of the old red house and I found the springs from the chair which had sat stoically it the upper room. The wheel chair sat off to the side as if it had been moved to spare it from the blaze. There was no trace of the Ouija board I had seen in the hall, but singed doorknobs and hardware, the fire-hardened nests of Mud Dauber Wasps, crazed and melted Ball jars, iron window weights all attested to the lives once lead there.

I found one corner of what may have been a porch that was not completely burned.  In it, I noticed charred, but readable, pieces of newspaper from the 1924.  They spoke of Willebelle Hoage and Mildred Field; Lewis B. Scliwellenbach and Preston M. Troy being on the verge of announcing their candidacy for Governor; Star automobiles and their state-of-the-art brakes; the robbery and kidnapping of Mr. and Mrs. C. O. Darling, of Vancouver; house dresses for sale, $1.79.  There was a cartoon by W. A. Carlson, the title block of a serial by Mabel Cleland and a piece of art by Frank Godwin.  Tiny bits of history that the fire couldn’t erase.

Check out more of my photos at my Flickr photostream.