In 1865 a 19-year-old man, George France, made the decision that he needed to see the big, wide, world for himself.  Despite discouragement from his father, Elting J. France, and mother, Catherine (DuBois) France, he and a friend struck off on what would be new life for George.  It was the last time he would see his parents, or any of his siblings, Oliver, Henry and Jonathan.  Nor, apparently, would he ever meet his half-sister, Jannette Elizabeth France, who was born in 1871. 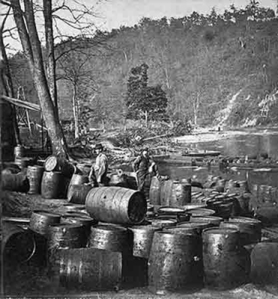 Oil was a dirty business

Their first destination?  The oil fields of Pennsylvania and on March 3rd, 1865, he and the friend arrived in oil town.  He never mentions his friend’s name, but the companionship lasted only a day or two after arriving in Pennsylvania, in the rain, where they jumped off the train into “the mud and oil a foot or two deep, and waded through it to the hotel in the dark.  First impressions were enough to convince his traveling companion that home sounded much better than adventure.

George worked in the mud and the muck for a year.  He learned from the legendary Coal Oil Johnny that,  as with gold rushes, very few make a lot, a few more made a little and the vast majority came away poorer, and dirtier, than they came in.

Johnny lived with his aunt, dirt poor, until oil was found under their farm. Apparently it was customary, in the oil regions, to keep a bucket of coal oil in the house for making fires.  In this case such a bucket was responsible for a bigger fire than wanted; it took the life of Johnny’s aunt and for the next year or so Johnny lived the life of a son of fortune; his pockets were stuffed with money which flew out as fast as it was stuffed in.  He ended up destitute.  Not so Mr. France.  He rolled barrels on a dock for 60₵ an hour, then got a job as a chain carrier for a surveyor at $3 per day.  Next he ran an engine pump for $4 a day. He became familiar with drilling techniques, bit sharpening and running a sand pump, used for pumping the drillings out of a well-being drilled.  The oil “boom” was dying. George, unlike so many others, could see it coming so on February 11th, 1868, he took the $1000 he had saved and moved on to a new adventure.

As a young man of 20, with $1000, he took some time to travel the county, experiencing trains, stages and boats, visiting relatives and friends who had moved out west and in general having a good time.

June of 1868 found him in Nebraska City in charge of a four mule team and wagon hauling “improved rifles” bound for Salt Lake City, having hooked up with a New York businessman who financed a supply and mercantile wagon train.  He drove his team for $20 per month. 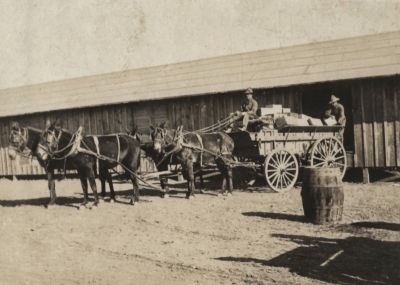 The type of team Mr. France might have driven.

George had never handled a four animal team before and he got hold of two of the best mules.  The wagon master matched those with two brand new, unbroken, mules.  He first tried the new mules in the back of the team but they kicked the end of the wagon to splinters.  To avoid that, he moved them to the front.  Apparently they liked the rear position; they broke the tongue off of the wagon trying to get back where they had been.  His plan was to take a place back in the train so he could follow the more experienced teamsters, “but, they started me out in the lead, just as if I knew something about leading a heavily loaded wagon train.”  Eventually, he mastered his mules and the wagon train, crossed the west to Utah.

Having reached Salt Lake, George continued to haul freight for a living.  He learned a great deal about the Mormons, their politics, the Mountain-Meadows massacre, their views on the US Government and their day-to-day lives.  While hauling freight, he managed to gather for himself a load of salt, “much of it so clear, one can read print through it some inches thick.”  He also met up with other wanderers, many of whom were headed for the mines in California.  He returned to St. George in January of 1869, sold his load of salt, then headed for Los Angeles. 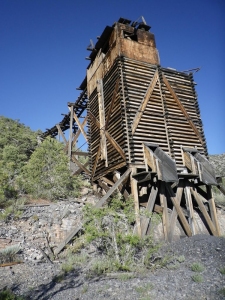 In Los Angeles Mr. France made the acquaintance of a mining company agent who convinced him that he would do well by accompanying him to the “rich, extensive mines ‘at Pah Ranagat in South-Eastern Nevada,'”  offering him a job running the engine mill for $8 a day.  His group traveled adjacent to Death Valley, eventually finding camps in Lincoln County, Nevada.  He traveled, worked and learned.  He developed an extensive understanding of the geological activities that had deposited the quartz, gold, silver and lead in the mountains.  He witnessed the nature of man in an area where State and County law was forsaken for “the government of the plain.” He gives examples:

“An Indian having killed a white man, was, with others, captured, tried without lawbooks or lawyers, and hung; the others being acquitted.

“A white man, of considerable eminence in the states, murdered another for his money; he was likewise given a fair, open trial and hung.

“An employer undertakes to trick his men out of their money; knowing that he has it, one of them presents a pistol at his head, with the proposition to pay or die–he pays.

“A boisterous desperado undertakes to ‘run the town,’ runs against some quiet little man, who kills him in his disgust at the cowardice of the famed bullies and toughs of the camp.

“The people were not afraid of, or prejudiced against the professional gambler and sharp, but they had no use for the mysterious midnight trickster or confidence men.”

George worked in the area for about a year and a half.  He contracted with another man, sawing 300 feet per day,  “to furnish timber and joice [sic] for $100 per thousand feet in the woods”  He contracted with another man to haul the timber. He worked two or three months in the mines for $6 per day, as a night watchman at the mill for $7 per day and experienced the conditions as the promised riches melted away and the biggest money-making business was selling shares to the unsuspecting speculators back east, then “going bust” and keeping all the invested money.  The work of the tricksters and confidence men, most of whom he believed to be Masons, was what the people despised.

Companies were in debt., agents skipped out and George found himself being owed about a thousand dollars.  Despite attempts for several years, he never collected and in 1870 “…I concluded to now make an extensive, general prospecting tour through the wild mountain ranges to the north…[and] would terminate my travels at Puget Sound…”.

For the next seven months France’s travels took him to mining districts in Nevada, Idaho and Montana; to the Owyhee, Upper Snake and Salmon river regions, through mountains covered with snow and July heat in the valleys.  He hunted and fished the area around, “two great falls of Snake River, 175 and 260 feet fall [sic]…”, Shoshone Falls.

Often meeting other adventurers, miners, travelers and the like, he heard that times were good in Washington Territory and “…horses were cheap in Walla Walla”.  He decided to go there, earn some money and buy as many horses as he could, and build up a herd to work with when construction of the Northern Pacific railroad began.

Leaving Fort Owens, in the Bitter-Root valley of Montana he and a companion struck out along the Lo Lo Indian trail for Lewiston, where he arrived in mid September, 1870, then crossed the river into Washington Territory, eventually building a home at the head of Alpowa Creek in Columbia County.  He was in Dayton WA, on the Tou Chet, (Too she), stream and near there he hired on with a farmer at $35 per month noting this to be the only good farming country he had seen since leaving Eastern Nebraska.  He worked a threshing machine for a couple of weeks, then filled the rest of his tenure hauling timber and rails from the mountain to the farm.

After his two months with the farmer, he found a demand for rails and clap boards, or shingles.  Although men already engaged in that endeavor told him there was little money to be made, he bought himself an outfit and went to work, trading his products for stock–mostly horses.  He spent the following ten months at this job. He notes, “…though not very rugged, and unable to do as much hard work as other men, I made 8000 rails and 55,000 clap boards, which was more than was done by any other man about me or whom I knew of”.

This display of industry brought him to the end of his ten months owning $800 worth of horses and other property.  In addition to his work, he bought a land claim on the prairie fourteen miles away and built  a twelve by fourteen lumber cabin on it. This he sold for a hundred-dollar mule and $50.

A cabin of the type France might have built.

In 1871 George learned that his father’s manufacturing business had burned down and his mother had died.  He decided he had reached a point in his life when he would settle down, “and finding here apparently as favorable an opportunity to settle down and prosper…I concluded to remain, get married, make as good a home as I was able…and grow up with the country”.

I have yet to learn how he and Effie met.  If anyone reads this who has information to fill in the gaps I would ask you to please tell me what you can about the France’s. I know a little about Effie–her mother was married to John Cammack from March to August of 1853, Effie being born December 27, 1853, in Bloomfield, Davis, Iowa. Her mother married her step father, Walter Parks,on January 10th, 1864, in Walla Walla Washington.  Again, I would love to connect some dots here and would appreciate any help I can get.

Episode Two will deal with the establishment of the France homestead and settlement and the series of events which resulted in this hardworking, honest and industrious man spending seven years in Seatco Prison.  Stay with me.