Just outside the Nisqually entrance at the south-west corner of Mount Rainier national Park lies the little town of Ashford.  Well, not really a town, but officially designated by the census folks as a CDP,  or census-designated place.  Not much is visible as you travel highway 706, but there is some history there. The area was named for Walter A. Ashford and his wife, Cora J. (Hershey) Ashford.  Walter immigrated to the U. S. in 1871, from Ipswich, England. I found one source that said Cora was born in England, another, the 1900 census says she was born in Michigan.  Either way, found her in Nebraska.  In about 1880 he homesteaded in the place he would plat as the town of Ashford in 1904; he had filed for a town site in 1891.  He and Cora were married 1886 and had four children; daughters Zina B., Emma G. and Mildred M. and son Fred L.

Ashford was planned as a terminus for the Tacoma Eastern Railroad line and there was some speculation that with his close association with major Tacoma promoters, Walter was actually sent to the area to plat the town and get things ready for the railroad’s arrival.  The railroad was intended for use in logging and mining but let’s face it, the chance to share the mighty mountain made tourism a mainstay. 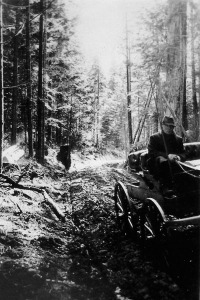 Perhaps one of the wagons used to transport tourists to the mountain. courtesy of The Ashford Mansion

In 1883 James Longmire built a trail and cabins 13 miles from Succotash Valley,where Ashford was located.  Walter drove wagon loads of people up to Longmire to see the sights. One of the type of wagon used was a, “Four horse Tally-ho,”  I have no idea if Mr. Ashford drove one of these, but I love the name.  Tourism had begun.

In 1894, Walter built the first Ashford Post Office and Cora became the Postmistress. According to “The Big Fact Book About Mount Rainier” she held that position until 1938. According to Washington State Death Certificates, however, she passed away November 3rd, 1933.  As to who ran the post office for the remaining five years, that remains a mystery to me.

The Ashford Post Office with the Postmistress in attendance

The same book tells us that at one time 11 year-old Jess McCrea carried the mail, on foot, the twenty miles from the post office to Paradise on Mt. Rainier.  The salary for that trip?  One dollar per day and a free lunch. The story goes that he would do his best to deliver the mail, then make it back to the kitchen at Longmire by lunchtime.  Times were lean for he and his mother; that free meal meant a lot to both of them.

I searched for information about Jess and found quite a bit about Jesse McCray, born in Texas about 1891 or ’92 in but living in Ashford.  I surmise this is the Jess in question.  If so he stayed in Ashford and married a woman named Jetty, or Jennie; I haven’t been able to find a maiden name, but they had a son named George McCray who would have been born around 1917, and a daughter-in-law named Jean McCray.

Today, as one drives through Ashford, which never actually was incorporated as a town, it’s obvious that most of the business there is directed toward tourists.  An exception is Suver’s General Store, probably the most prominent business in town located right next to the post office.  Suver’s serves the local population as only a general store can, by providing a little of everything they need…generally.

A look at the Ashford Mansion makes if fairly obvious that the Ashford’s were financially successful.  The home was designed by Cora based on a Georgian home she had seen while visiting England and built in 1903.  To get a real feel for the size and grandeur of the home I encourage you to go to Ashford Mansion’s web site and check out their photos.  Cora had fine taste.

When Walter passed away, youngest daughter, Mildred Ashford, Harmon, Raymond, Beech, inherited the mansion and upon her passing in 1967 it was sold to Ed Mudge.  There were two other owners between Ed and Han Green and his wife and it is currently owned by Willard Jones.  During those years it was both a private residence and a Bed and Breakfast. Currently it remains the former.

Just down the road from the wonderful and majestic Ashford Mansion I found what was left of someone else’s little castle.  Built on a foundation of logs, time, weather and gravity had taken their toll.  Still, at one end sat a chair with a coffee cup on the arm as if someone would return on a warm summer morning and sit in the woods and relax with a cup. 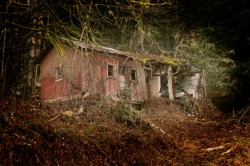 Over the years I’ve been to Ashford many times, either passing through to the Mountain, exploring and photographing, or patronizing one of the tourist attractions.  Some of my best memories from my early days in Washington are of the Copper Creek Inn.  Not only did my family and I usually stop there to eat en route–copper topper cinnamon rolls and blackberry pie–but in the mid to late ’60’s I stayed in their cabins.  Once, my family and I rented one of the small cabins which, at that time, were operated by the main Inn.  I recall that one night there was a horrific electrical storm; the next day we went to a power pole that had been near a lightning strike and found chunks of the ground which had been melted into dark glass.

Copper Creek Inn with Frenchie’s alphabet on the side

Later, as a member of a youth group, we rented the big lodge, which had been used, I believe, by loggers or miners originally.  We loved it.  In later years the cabins and lodge were not rented out — they were either permanently leased or sold by the lodge.  Today they are once again part of the Copper Creek experience and have been renovated and added on to.  Additionally, the rooms above the original Inn have once again been opened for lodging; we stayed in Roselea’s suite, the one former owner Roselea Triggs used to occupy.  It’s also where Eva Crisman Blum lived in 1935. 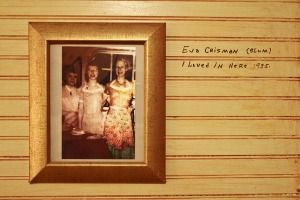 Copper Creek is a perfect place to stop going to, or, especially coming from, Mt. Rainier.  The food is excellent and the physical restaurant hasn’t changed much over the years, right down to the Fred Oldfield mural on the wall and the alphabet made of naturally formed roots and branches collected by Hank, “Frenchie.” Canty, Roselea’s partner, gracing the outside wall of the building.  One of the perks is access to the hot tub in the woods.  A fun place for even old folks to get naked in the dark and cold.

Another business I’ve had personal experience with is Wellspring Spa, located on Kernahan Rd.  My wife and I have stayed at several of the facilities.  Wellspring is unique in that, unless you want to, you never see an employee.  Your reservation having been made, you arrive to find your key and directions posted on an outdoor 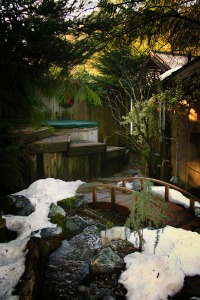 bulletin board.  Pick it up, go to your lodging and relax.  From a small tree house to a multi-family lodge and canvas yurts, they have the bases covered.  Once again, there’s those outdoor hot tubs.  Hot tubbing in the snow is a wonderful experience.

The owner of Wesllspring is Sunny Thompson who, as well as being a wonderful landlord, is a world-class masseuse.  Trust me, been there, done that, have the memories.

Ashford Creek Pottery is located at 30510 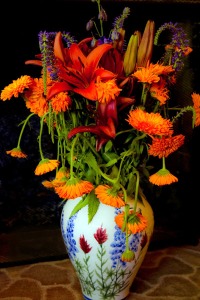 State Route 706 E.  My wife and I visited there, well, before she was my wife.  We still use the vase we bought nineteen or so years ago.  Operated by Rick Johnson and Jana Gardiner they produce locally themed top quality pottery.

There are so many more–enough to justify at least one more post on Ashford: There’s the Highlander Restaurant, built from what was the basement of the school before it burned down around 1959; there’s Jasmer’s Lodging at Mt. Rainier–I’ve never stayed there, but it’s on my list; Painter’s Art Gallery; Alexander’s Country Inn and a multitude of cabins, chalets, hotels and B&B’s, and they’re almost all hidden in the surrounding forest.

One business that is not there is “The Logs Resort Motel and Restaurant.”  I have no idea if the building still exists, but the business has passed on.  Owned by “Red” Jones who, in the early ’60’s, apparently abandoned the place abruptly leaving his personal belongings and his employees, unpaid.  It boasted a swimming pool, trout pond, shuffle board and a gift shop, fine foods and comfortable accommodations. In 1961 a fire destroyed the kitchen, as well as the employee’s lodgings which were right above it.  Rumor has it that Red wound up in California.

Still to come is the story of Zina Ashford and her marriage to Hollywood mogul, Woodbridge Strong Van Dyke II and her sister, Mildred Ashford, Harmon, Raymond, Beech.  Who Knows what I might uncover about the rest of the family?

The Woods are Frisky in Ashford

The Test of Time