As promised, I spent Wednesday taking a trip back to Bucoda, just so I could say I ate at Joe’s Place.   Well, that wasn’t the only reason, but I did have a top notch patty melt at that establishment.

Joe’s is unique, it has been owned and operated by the Wall family for the last 115 years.  Currently it is owned by Robert Sr., who drops in daily to make sure things are copacetic, and managed by his daughter-in-law, Judy. 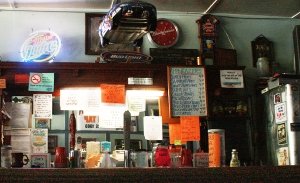 The dining room is in front, with one table and several seats at the counter by the grill.   The remaining area is the bar and it resembles many, time-worn, small town bars throughout the west. 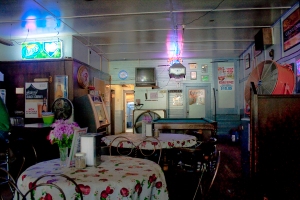 When I walked in at about 12:30, there were two or three guys at the bar who appeared to be regulars.  Of course, in a town this size most anyone there would be a regular.  One in particular appeared to be stationed there for the day; newspaper, bag of candy…even brought his own fly swatter.  A while later a man and what I believe were his sons sat up front and ordered Jumbo Joe Burgers.  Judging from the conversation I heard, these burgers have everything you can think of on them…twice.  A tall, shapely, blond woman with pigtails came in and sat at the counter, but she wasn’t there for the long haul and we were joined by a gentleman who, like myself, had been in town once before some time ago.

After the long drive on a hot day a beer was a must and Joe’s still carries Oly on tap.  Some of you may have been around when Olympia Beer was actually made here, in Olympia…well Tumwater to be absolutely accurate.  Joe’s has perhaps the oldest continuous acct. with the company having maintained their account with Olympia since 1898, even after Pabst took over and moved it away in 1984. 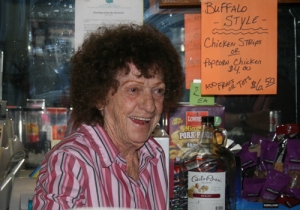 Jean was running the place while I was there, “Mean Jean,” to kids who come in and shoplift.  She ran a mean grill, and, was helpful with some historical insight – she knows a little about the place, she’s been working there for 25 years.   She told me that she’s 80, but I’m not buying it.

The original building that housed the restaurant burned down in 1930, but the original bar was saved. This would be the same bar Joe Wall died behind as he worked.

As per regulations that followed, the current building is concrete.  The pool table shows the wear of many a game, the many fans around the room tell the story of hot days with no air conditioning and the pictures on the wall tell the story of the Joe’s and a bit about Bucoda.

If you’re looking for a spotless new tavern with sparkly everything, don’t bother stopping in, but if you’re passing by with a dry throat or a belly full of hungry, and you want the feel of history around you while you take care of all that, stop in and have a bite and a brew.  I’d recommend the Oly…and leave Jean a good tip.

After lunch, I spent some time driving around town, and it really doesn’t take that much time to drive around town.  Most obvious are the improvements that have been made to the Odd Fellows Hall—now the community center—since I was there four years ago.  Nice to see.

Following Jeans directions, I found the site of the infamous Seatco Prison, now commemorated only by a stone monument and bronze plaque.  I’ve also discovered that I’ve been pronouncing it wrong; it’s not “seat-ko,” it’s “se-AT-ko.”

The mills, the manufacturing, logging, mining—all gone; but the town goes on. 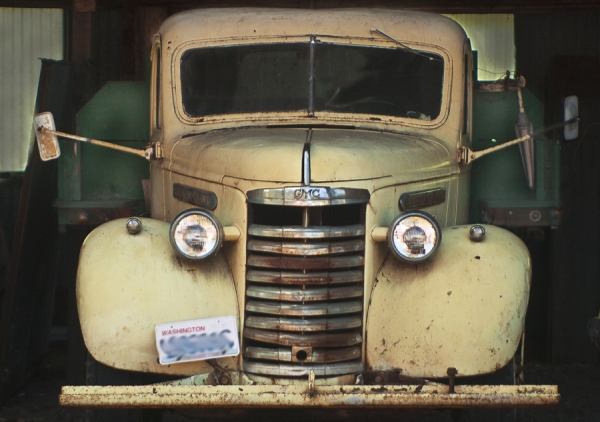 I leave you with a photo of an old-timer from town; I believe this is a 1940 GMC flatbed.  One that’s done some working.

For more of my photography, check out my photostream at Flickr.