As I wrote my last post, I was wondering about the fate of Garfield Hall.  When I was there in 2008 there was talk of razing the building due to the cost of renovation.  I contacted the Washington Dept. of Veteran’s Affairs and found that the plan is for renovation, however,when that might happen is uncertain; funding has not yet been found for the project.

Among the residents who passed their last days at the Soldier’s Home were: Joseph Marion Gale, who passed away at the age of 77 in 1913.  Mr. Gale, born in Illinois, was a teacher, a newspaper editor and a soldier in two Indian wars and the civil war.   And Isaac Newton Hall, the last living soldier from the Grand Army of the Republic, who passed away in Oct. of 1940, as well as Medal of Honor winner, Sgt. William H. Sickles.

William H. Sickles was  born Oct, 7, 1844, at Danube, New York, son of George and Eliza Sickles, and brother of Gertrude.  William joined the service at Columbia County, Wisconsin at the age of 16.

According to the Congressional Medal of Honor Society, while a member of Company B of the 7th Wisconsin Infantry,  he was awarded the Medal of honor after he,  “With a comrade,” Corporal Albert O’Connor , ”attempted capture of a stand of Confederate colors and detachment of 9 Confederates, actually taking prisoner 3 members of the detachment, dispersing the remainder, and recapturing a Union officer who was a prisoner in hands of the detachment, “ at Gravelly Run, VA, March 31 1864. Sgt. Sickles and Corporal O’Connor, also a Medal of Honor recipient, both ended their lives at the Orting Soldier’s home.

Although I have been unable to determine exactly when, Sgt. Sickles married Jennie E. Craley and they had two sons: Lewis, born in 1869, and Claude, born in 1877.   Jennie died in 1932, Sgt. Sickles outlived his compatriot, Corporal O’Connor,  by ten years, dying September 26, 1938 at age 93.  He was the last remaining Medal of Honor winner of the civil war.  Corporal O’Conner died April 3rd, 1928 and both remain in the Orting Cemetery.

More examples of my photography are available at my Flickr photostream. 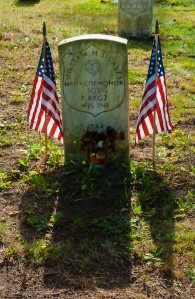 2 thoughts on “Onward with Orting WA”